A new method for manipulating the gel-like environments that house stem cells could help researchers direct the growth of these versatile cells into bone, tendon, tissue or other specific lineages, says a Texas A&M University biomedical engineer who has developed the approach.

Working with collagen-based hydrogels, which are biodegradable gels used in a number of biomedical applications because of their compatibility with the body and its processes, Akhilesh Gaharwar has developed a method for modulating their stiffness without affecting chemistry or structure – a result that could have major implications for stem cell research. Gaharwar, assistant professor in the university’s Department of Biomedical Engineering, has published his findings in the scientific journal ACS Nano. The full article can be accessed at http://pubs.acs.org/doi/abs/10.1021/acsnano.5b03918.

Specifically, Gaharwar has been able to increase a hydrogel’s stiffness by 10 times and its toughness by 20 times through a process in which he adds a small amount of spherical, magnetic nanoparticles to the collagen-based hydrogels. The entire process is complete in a matter of seconds, and it enables him to customize the gel along varying degrees of stiffness and toughness, depending on the amount of nanoparticles in the material, Gaharwar says.

The process, he adds, has another distinct advantage: it’s cell friendly. Because Gaharwar is using extremely low concentrations of nanoparticles, his process doesn’t significantly alter the chemical composition of the hydrogel.

Controlling the physical properties of hydrogels, Gaharwar explains, is essential because these gels need to be durable while also matching the properties of the tissues they are simulating when deployed in the body – for example, when acting as scaffolds that aid with healing of internal injuries. That’s just one of a multitude of biomedical applications Gaharwar’s hydrogel could impact. In addition to tissue engineering applications, Gaharwar’s mechanically enhanced hydrogel could advance drug delivery approaches, biosensors and other technologies, but it could play an even more important role as a tool for learning about stem cells, he says. The system, he explains, could enable researchers to better understand how stem cells behave and even control how they differentiate into specific types of cells. 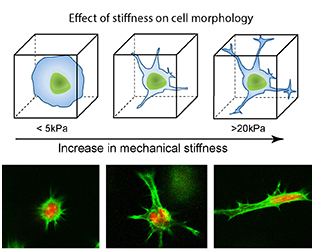 Known for their ability to develop into different cell types – such as a muscle, blood or brain cells – stem cells have the potential to serve as an internal repair system, replenishing other cells. Key to this transformation, Gaharwar notes, is the microenvironment surrounding the stem cells. Depending on where these stem cells are located within the body, these cells will transform into different types of cells, he explains. For example, stem cells that are being stretched in stiffer environments could ultimately grow into bone cells whereas stem cells that remain round in softer environments might develop into cartilage. Think of it as a kind of domino effect: the stem cell’s microenvironment influences its shape, and the stem cell’s shape influences its development into a specific cell type. Given this fact, Gaharwar believes controlling the stiffness of the cell’s environment (in this case a hydrogel which encompasses stem cells) could result in increased control of stem cell differentiation.

“We know that under certain physiologic conditions, stem cells can be induced to become specific cells with special functions,” Gaharwar says. “We are investigating if we can differentiate these cells into distinct lineages simply by controlling the mechanical environment of these cells.”

Controlling that environment, Gaharwar says, is achieved through a process known as crosslinking. Crosslinking, he explains, involves joining the polymeric chains that make up a hydrogel so that they form an interconnected network that basically serves a backbone for the gel and, as a result, increases its stiffness. Joining these chains requires Gaharwar’s nanoparticles, which serve as a sort of mortar by linking these chains at a molecular level. These spherical, iron oxide nanoparticles, which have had their surfaces modified by Gaharwar and his team, have multiple conjugation points at which the polymeric chains attach by forming strong chemical bonds, he says. When this occurs, a network of chains is formed and the hydrogel is reinforced, he says.

Other standard technologies that make use of different nanoparticles don’t result in the same level of mechanical stiffness because the nanoparticles aren’t chemically interacting with the polymeric chains in the gel; they’re just entrapped, Gaharwar explains. What’s more, the approaches that do achieve some measure of stiffness often produce a non-friendly environment for the cell that results in cell death due to high concentrations of the reinforcing agent, he says. Gaharwar’s approach overcomes that challenge by using a 10,000-fold less concentration of nanoparticles. 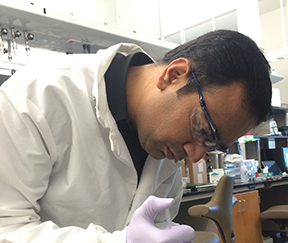 Fueled by the promising initial results he and his team have achieved, Gaharwar plans to continue working with the enhanced hydrogel to determine if it can indeed trigger a differentiation in stem cells. These cells, he explains, need to experience a dynamic environment (as they would in the body) where varying degrees of force are applied through the hydrogel and experienced by the cells within it. In the next phase of the research the team, he says, hopes to introduce this external stimuli with a bioreactor so that more in-depth studies can be conducted.

About the Department of Biomedical Engineering
Committed to solving the world’s greatest health problems through the exploration of new ideas, integrated research and innovation, the Department of Biomedical Engineering at Texas A&M is producing the next generation of biomedical engineers, developing new technologies and new jobs, and achieving revolutionary advancements for the future of health care. The department has unique strengths in regenerative engineering, medical augmentation, molecular diagnostics/theranostics, tele-health, and precision medicine, and its faculty members are internationally recognized with collaborative relationships that span engineering, physical and natural sciences, medicine and veterinary sciences.

LINKEDIN
Connect with us